Eating in a Thai restaurant with nondescript decor and being served by a teen aged white kid with those huge black circular gauged earrings stretching his earlobes doesn’t make for an authentic Thai experience. Even restaurants in the world showcase in Epcot center employee waiters and chefs from the countries that they recreate. But what makes food authentic? Is it the way the food is prepared, where you eat it, who it’s served by, or all of the above?

Today I’m going to give you directions on how to make authentic Jersey grub. First, grow a five o’clock shadow, grab a cigarette, gain about 30 lbs and begin sweating. As the stereotypes dictate, this is a cook at a Jersey diner. If the stereotypes continue, he only knows how to cook up a pork roll egg and cheese sandwich, or anything greasy that has peppers and onions slathered on top. Despite what many “foodies” (I’m sorry to all my foodie friends but I hate that term) will lead you to believe, Jersey doesn’t really have it’s own cuisine since we are lucky to have a huge mish mosh of everything there is to offer. Sure we have about a half a million diners in our state, but the majority of our signature meals are very basic and nothing to describe as “mouthwatering” or “savory.” That’s not to say that meals at our restaurants can’t be described that way, it’s just that many of them don’t actually serve the type of “Jersey Grub” that THE JERSEY GRUB TRUCK offers.

Started by a Jersey guy who moved to the west coast, The Jersey Grub Truck can be seen all around Los Angeles. We are known for our blueberries and cranberries, but the Jersey Grub Truck serves mostly fat sandwiches. For instance, an L.A Weekly post highlighted that one of the menu items is The Fat Jerz Sandwich, which is hamburger, egg, pork roll, and BBQ sauce. Is it the pork roll that makes it Jersey? Can you incorporate salt water taffy or pork roll into any meal to give it that Jersey zest? Wow, that’s a stretch. The Sexy Armpit has already glossed over New Brunswick’s fat sandwiches featured on Man vs. Food, and that is essentially what the Jersey Grub Truck serves. The Jersey Grub Truck stole the idea of The Grease Trucks and brought it to Hollywood. If there’s one thing that Jersey is NOT, it’s Hollywood, and if you have not left Jersey that is precisely the reason why. Not only are we on opposite sides of the country, but we lead extremely different lifestyles. Regardless of our differences, I’m glad there’s a little more of Jersey being spread around L.A!

To get “real” Jersey grub, you don’t need to sing “Born To Run,” while cooking or stop at a catering truck. For tips on the best Jersey cuisine check out Jersey Bites and also read Pete Genovese’s book, Food Lovers Guide to New Jersey. But the best way to find authentic Jersey cuisine is to discover it for yourself. Your best bet is heading down to that family owned neighborhood dive, it will surprise you. 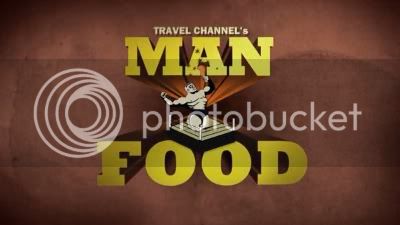 In the past few years New Jersey has been shoved down TV viewers throats to the extent that I’m sure it makes them want to regurgitate. I doubt the fine folks in North Dakota want to constantly see New Jersey pop up in every show they’re watching. Aside from contrived reality shows, food shows have also been wrapped up in a love affair with the Garden State. I’m not sure why though, since much of our native cuisine consists of deep fried, artery clogging crap just like what Adam Richman encountered in Season 2 of his show (because naturally we weren’t good enough for Season 1), Man vs. Food on The Travel Channel.

Adam Richman responds to food challenges all over the country and this time around he visited The Grease Trucks in New Brunswick NJ, a legendary spot serving the perfect selections to cap off those nights of binge drinking. If you’re not familiar with the local food phenom, it not only serves Rutgers students, but even out-of-staters come to chow down on some deliciously unhealthy food.

In this episode, Richman answered the “Fat Sandwich Challenge” at RU Hungry “The Original Grease Truck,” in which he must eat 5 overstuffed sandwiches in 45 minutes. Some of the renowned sandwich amalgamations pile on chicken fingers, mozzarella sticks, pork roll, cheesesteak, french fries, and other heavenly items into a sub roll. To psych Richman out, the owner informed him that only around 16 people out of approximately 250 have risen to the challenge and successfully downed the big 5 before the clock stopped. If Richman wins, he gets to create his own sandwich which will be named after him.

SPOILER ALERT!!! Richman didn’t win, but he went down swinging. I could have done without the little side interviews with the onlookers that the production crew shot and intercut between the tense scenes of him wolfing down the sandwiches. It was obvious that they were fed some terribly cheesy lines.

Richman also stopped at Harold’s New York Deli in Edison, NJ, which serves only monsterous, supersized meals. I’ve been going there since it opened in 1997 and my first reaction upon seeing the waitress bringing me my food is always “No human being could finish this.” In the above picture, Richman is seen with one of Harold’s Deli’s signature sandwiches, a foot tall, 10 pound corned beef and pastrami sandwich!

I couldn’t believe that Richman had more room in his stomach to cram even MORE food into it! There’s not a more appropriately named restaurant to accomplish that than Stuff Yer Face, also in New Brunwick, NJ. Open since 1977, Stuff Yer Face is known for their stromboli or just “bolis.” They have 30 different ones to choose from and the option to make your own. Richman customized his own boli, and after it was finished baking, he sat down to eat it. Let me say that damn thing looked so delicious that The Sexy Armpit is now looking to stuff his face there very soon!