There’s not much that can make you feel better when you’re sick…except maybe The Muppets.

I’ve been utilizing all of the traditional methods with the intentions of feeling better, including taking medicine, getting extra rest, and watching many therapeutic hours of Netflix and DVDs from my own collection.
Aside from the other usual remedies like hot tea and chicken soup, I realized I’m on my own in my fight against whatever bug has invaded my body. In my case, my sinuses have been exploding through my face and I’ve had a cough that sounds like the bark of rabid dog. Not only have I felt really crappy, I’ve also been annoying the hell out of myself. At times I was too out of it to even get up off the couch. You know those types of days where you catch about 20 minutes of 6 different movies throughout the day because you’re in and out of consciousness and paying attention to a full movie is way too much work?

When I finally rose from the couch, I was hungry, and I also felt in the mood to watch something starring The Muppets because I wasn’t able to get out and see Muppets Most Wanted this weekend.

I own all the Muppet films, some I recorded from TV when they originally aired, others were official purchases, so I had a bunch of stuff to choose from. My selection was offbeat and one that I’ve actually ignored since it first aired in 2005. Surprisingly, from the dusty innards of one of my DVD cases, I picked out Muppets Wizard of Oz. It was the original broadcast that I recorded when it aired on The Wonderful World of Disney. It even had an intro with Michael Eisner like he used to do in the ’80s. Not choosing one of the more popular Muppet offerings didn’t feel like my finest hour, but something was telling me it was the right choice. After watching it though, I may even rank it above one or two of the other Muppet endeavors. It’s not disappointing as some reviewers will lead you to believe. It’s pretty funny and it even stars Jeff Tambor!
That was the time Muppets traveled to OZ, but what about the time they travelled to New Jersey? YUUUP! They had a sweet gig live tweeting Super Bowl XLVIII, but the catch was that they had to get to MetLife Stadium in East Rutherford, NJ to meet up with Kermit the Frog first. Luckily the Muppets had been starring in a series of Toyota commercials during that time, so they had easy access to a fleet of their latest cars. They all crammed into a Toyota Highlander and hauled ass to the big game. And I write big game because they can’t say Super Bowl in the commercial, but the Swedish Chef can, well, sort of. The Sferndy Boom!
www.SexyArmpit.com 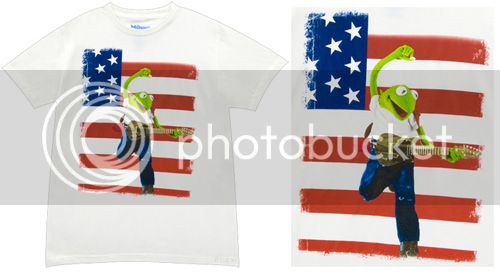 Kermit The Frog Born In The U.S.A T-Shirt
available at 80s Tees

It’s not 1984, but Bruce Springsteen AND The Muppets are having a pretty damn great year! Bruce’s latest album, Wrecking Ball, (not with the Electric Mayhem, but with the E-Street Band) debuted at #1 on the charts last month and his concerts are selling out like crazy. According to Billboard, this album marks Bruce’s TENTH number one album, which ties him with Elvis for third most number ones in history, behind only The Beatles and Jay-Z.

Also enjoying continued success are The Muppets. For many of us, Kermit, Miss Piggy, Gonzo, Fozzy, and Animal have never left our lives, while others were delighted to see their resurgence. Their 2011 comeback film, The Muppets, was the most lucrative film in the Muppet franchise, even nabbing an Academy Award for best song.

The t-shirt pictured above is a Muppet styled parody of Bruce Springsteen’s most successful album ever, Born In The U.S.A. Forget about the “Rainbow Connection,” there’s definitely a Bruce/Kermit connection that needs to be discussed. In both Bruce songs, “Rosalita,” and “Wrecking Ball” he references “…the swamps of Jersey.” A long time ago, Kermit the Frog was born a little tadpole in the swamp so it’s very possible our little green felt friend may have been born here in Jersey rocking out to BRUCE with his banjo!

from Muppets Take Manhattan (1984)
KERMIT’S DOCTOR: “No doubt about it, you have amnesia. Now, the problem is, you were found with no identification and oddly enough, wearing no clothing, so I did some research into the major nudist colonies in the area and I think I’ve come up with something…”
KERMIT: “…oh?”
KERMIT’S DOCTOR: “You are Mr. Enrico Tortellini of Passaic, New Jersey”
KERMIT: “well…I really don’t feel Italian.”
KERMIT’S DOCTOR: “…it was just a long shot anyway”