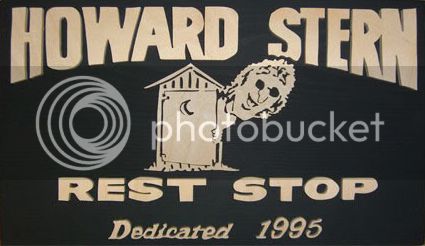 New Jersey might be known for Bruce, Bon Jovi, and MTV’s Jersey Shore, but there was actually a time that the King of All Media himself and the newest judge on America’s Got Talent, Howard Stern, was also the talk of the state. Many years after Howard hosted his own late night TV show in the ’80s on Secaucus NJ’s WWOR channel 9, Howard popped up in another part of Jersey, but in a quite different capacity. Although Howard will forever be associated with New York radio, he’s also etched in the history of a New Jersey rest stop.

While on the air speaking with then-candidate for Governor of NJ, Christie Todd Whitman, Howard half jokingly said he’d endorse her campaign if she dedicated a rest stop to him in Jersey. Whitman wound up getting elected in 1994, and on March 19th, 1995, there indeed was a plaque installed at the rest stop on I-295 in honor of Stern. On the plaque was a cartoonish picture of Stern popping his head out of an outhouse in the Burlington, NJ rest stop. It was stolen merely days later. Just finding a picture of the infamous plaque on the Internet proved to be quite a challenge. (I finally found it thanks to The Jersey Shore Mom!)

The shock jock’s rest stop quickly became seedy. Stern named the rest stop after a segment on his show, the “Show Us Your Tits Scenic Overlook.” Motorists were using the bathrooms at the rest area for sex and who knows what else. Gee, what a surprise! In 2003, Governor McGreevy ordered the rest area to be shut down to save up to $1 Million dollars in operating costs. But it was most likely because of the backlash of people who thought the sexual escapades going on there were indecent. McGreevy later came out of the closet and actually admitted to engaging in sex acts at rest stops in New Jersey.

Since then the area was locked up and all toilets were removed from the premises. As the years passed the rest stop became neglected and started to decay, but it hasn’t been forgotten.

As of 2010, when this AP article was published on NJ.com, rumors were flying that the state was thinking of selling the naming rights of all of our rest stops to large companies. This revenue could add up to over a $1 million dollars a year or more.

She may have been one of the reasons why Howard Stern and his first wife were separated. I feel so damn old saying this, but, back in the late ’90s, during the making of Private Parts, Howard constantly proclaimed on his show that if he wasn’t married he would love to be with actress Mary McCormack. He called her his “movie wife,” as she portrayed Alison Stern in the 1997 film based on his best selling book.

Since starring as Howard’s movie wife, McCormack appeared in a steady stream of films and TV shows. Some of her credits include Deep Impact, the underrated comedy Dickie Roberts: Former Child Star (Nuckin’ Futs!), K-Pax…yes K-PAX, and TV shows ER and The West Wing. McCormack also had a main role in 2007’s 1408, a pretty decent little thriller based off a Stephen King story.

Most recently the Plainfield, NJ-born actress starred in USA Network’s In Plain Sight. The series premiere in 2008 grabbed over 5 millions viewers. Despite its initial success, In Plain Sight’s five season run will be coming to an end with tonight’s episode.