ENERGIZED is not a word that usually describes someone who just landed in Newark Airport. Or Newark Liberty International if you like verbose airport euphemisms, and yes that IS a euphemism. For The Sexy Armpit though, once I landed back in my angry, traffic-jammed state, I breathed the toxin-filled air in deeply and the gross atmosphere immediately began powering me up as if I was Mario after getting a fire flower. You’d think it would be the opposite, but no, while in Vegas, I didn’t feel like I had that extra kick. The city might be sinful, but it’s missing that special mutagenic compound found in New Jersey’s air, water, and judging by their extreme attitudes, our people. That’s not to say it wasn’t fun, so here’s a run down of our Vegas trip.

Miss Sexy Armpit and I have been to Vegas more times than you’ve been to your Great Aunt Esther’s house. And that’s just not right – you need to visit her more often you ungrateful prick. Who else will eat her 8 year old Lorna Doone cookies?

Since we’ve had many Vegas vacations in the past, and we’ve taken part in so much of what Vegas has to offer, we’re always looking for some shlocky and offbeat stuff to do. One of the first orders of business was finding the costume and decoration store, Halloween Mart, which I first read about in Dinosaur Dracula’s column Deadsites. It bills itself as the first online Halloween store. I felt it was too much of a coincidence that Matt wrote about this store recently and I was heading to Vegas, so I couldn’t be in Vegas and not drop in. The potential for this to be a wasted trip to a store was huge because Halloween shops often range from average, to exactly the same as every other Halloween store you’ve ever walked into. I’m happy to report this place does indeed rank in the top tier of Halloween stores, if not the best I’ve personally shopped at. 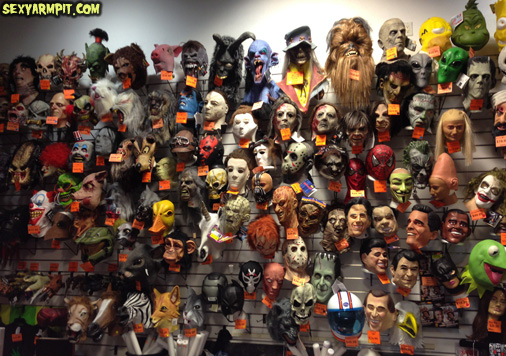 Why was it such a good place? First, it’s huge. Their selection of costumes and masks is as extensive as they tout on their site. They had a pretty typical selection of interior decorations in the back aisle, but when it comes to giant, over sized Halloween decorations and animatronics, they have it all locked up. Hung high up on the walls are several giant crazy looking ghouls and witches, but the real magic happens as you make your way to the back room. The back room is a showplace, but in effect it becomes its own little walk though dark ride. The space is dimly lit and filled with every moving skeleton, reanimating corpse, conjuring witch, and regurgitating demon child that you can imagine. It was so much fun walking through there. They even had a life size Captain Spaulding from House of 1,000 Corpses, as well as the most monstrous Freddy Krueger mask and glove that exists on earth, unless King Kong likes to do Freddy cosplay, then these would look like cute little fashionable earrings that he picked up at Claire’s in the mall. 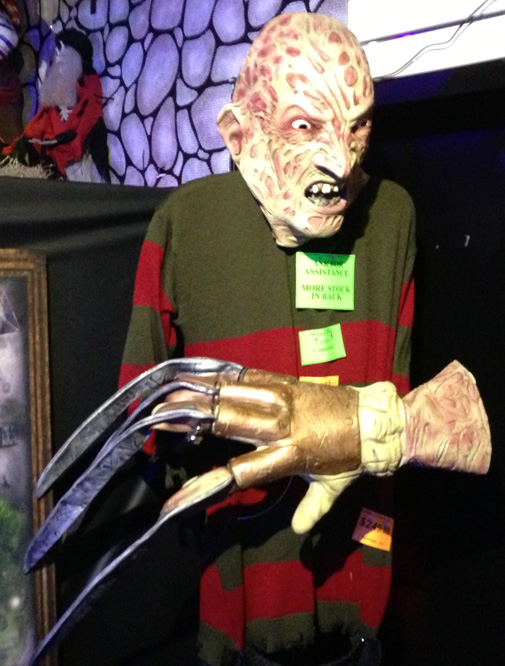 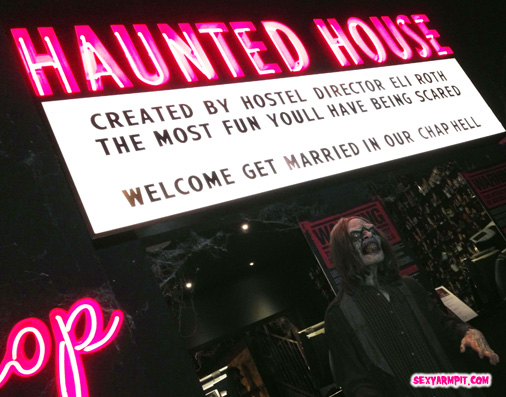 Last year’s trip to Vegas didn’t afford me time to walk through Eli Roth’s Goretorium, so I made it a point to go there this year. I really wasn’t expecting this to be an overly impressive attraction and I was right. There’s two options: walk through with a “tour guide” during the day, or go through at night with actors. I was there during the day so I only had one choice, and I was fine with that because I was just curious to see how it compared to Times Scare in New York City. Even with Eli Roth’s name on the establishment, it was still just OK for me. The gory special effects in the scenery of each area you walk through were all intricate and well done, but the storyline was a bit lacking. This is definitely an attraction for the fans of torture porn rather than for someone seeking a good old fashioned haunted walk through and that’s exactly what I thought it would be. It was $10 bucks to get in because the girl at the entrance handed me a $5 dollar coupon, which was reasonable either way, but I would’ve went in regardless just to experience it. There’s not much to do for horror genre fans in the area so if you’re into haunted attractions and you’re planning on going to Vegas, give it a shot. 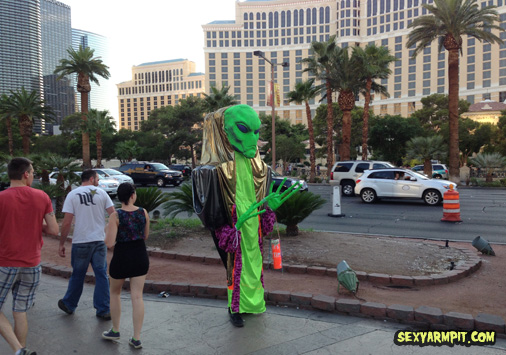 So your alien had a room at the Bellagio in Las Vegas?
Oh, just a typical day in Vegas walking down the strip. 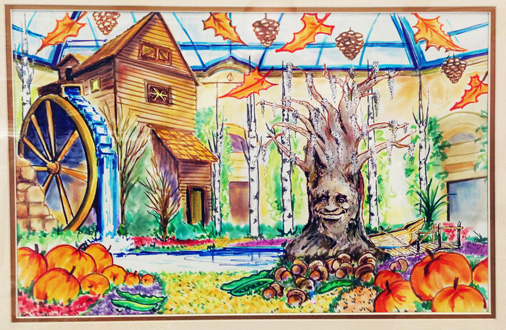 Speaking of Bellagio, we decided to take a look at their plants. No I haven’t become a horticulturist or anything like that, it’s just that the Bellagio always has an elaborate setup in their conservatory and botanical gardens to reflect the flavor of each season. Unfortunately their Fall scene wasn’t setup yet, but they did have teaser art displayed on easels which looked really cool. 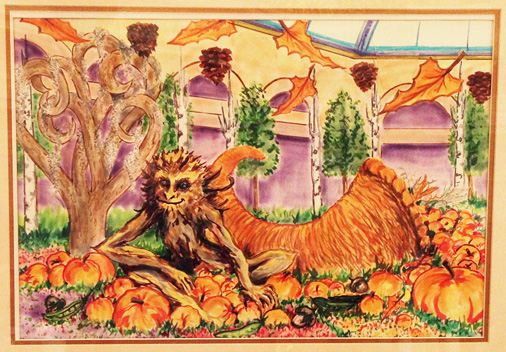 In between all this, we enjoyed a lot of good food, stopped into KISS Monster Mini Golf (again), and relaxed for a drink in Frankie’s Tiki Room. We also decided to head down to Freemont street late one night. A cover band, Arena, was playing hair band tunes and you guessed it, arena rock! We walked by just as they were playing “Rock and Roll All Night,” from KISS and Poison’s “Talk Dirty To Me.” It was here that I truly noticed that downtown Vegas is crawling with umm…unique people. These characters included a drunken Santa who meandered into the crowd to watch Arena. He and his drunken buddies created their own mosh pit of sorts. One guy was just way too into dancing around to Poison that there was no way possible that he wasn’t insanely super high on very strong, illegal narcotics.

The centerpiece of our trip was, Pinup, a show at the Stratosphere starring Playboy Playmate Claire Sinclar. We had to waste some time before the show so Miss Sexy Armpit played a few slots. From far away I noticed a game that reminded me of one of the thousands of versions of Wheel of Fortune that every casino seems to have, but as we walked closer I realized it was a cool looking Twilight Zone video slot machine that I had never seen before. The machine was pretty damn flashy and although it’s usually forbidden to take photos on the casino floor, I snapped a couple nonchalantly because I thought it was too cool to pass up. 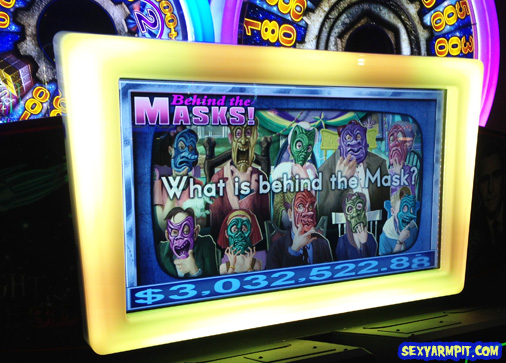 I asked Miss Armpit if she would mind playing it so I could see how the bonuses looked and what episodes they referenced. As she sat down I noticed that the guy sitting to the left of her on the 2-person machine reminded me of someone. It came to me rather quickly too, which convinced me that it had to be him. It was Richard Blade. Right now, you’re probably saying to yourself internally “Who the f*ck is Richard Blade?” He was only the charismatic HOST OF DANCE TV in Girls Just Want to Have Fun. Blade was also a popular radio DJ in L.A in the ’80s as well as a host of a couple of music themed TV shows. Shame on you if you don’t know him or teach a Learning Annex class on the study of his career like I do.

I hadn’t drank any liquor since lunch that day which was a dessert version of a White Russian at Max Brenner’s, so I knew I wasn’t having some sort of alcohol infused ’80s delusion. Blade wore a blue blazer and Ugg boots with his jeans tucked into them. He was chain smoking and had fairly more voluminous hair than I remembered him having. Bastard kept getting bonuses too. Then I started to wonder why the real Richard Blade, a classy man of refined taste, would even be playing a Twilight Zone slot machine so intensely at 9:45 PM on Monday night. Maybe I DID enter the Twilight Zone? My brain was split on this, forget gray matter, it was all patches of red and blue as if my mind was voting on if this was really Richard Blade or not.

Finally, I began to lean toward the fact that this guy was either really the best Richard Blade cosplayer of all time or a total impostor. I was tipped off by one major component that Richard Blade assuredly has: an accent. As much as I sooo wanted to believe that it was the real Richard Blade, this dude was just a regular schmo with a terrible fashion sense. Damn you, Richard Blade impostor, you would’ve been the highlight of our trip.
www.SexyArmpit.com