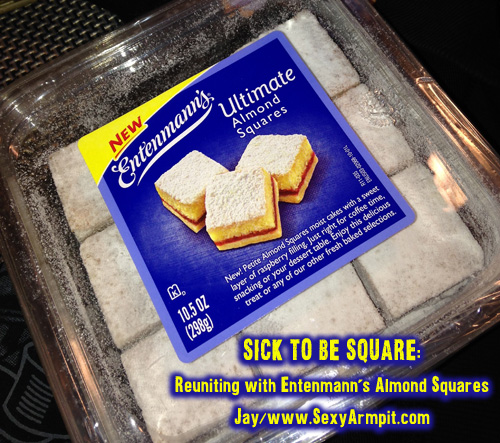 Strep throat sucks. I’m not presently afflicted with it right now, but I’ll never forget the first time that I had it. I was about 12 or 13 and it felt like the absolute worst kind of sickness I ever had up to that point in my life. Mostly because for that week or so, eating became an activity that I dreaded.

A chef I am not. A food reviewer? Far from it. But, like most of you, I’m a devourer of food. I enjoy the eating experience. Some people I know like to get it over with as quickly as possible. They’d rather open a compartment in their stomach and just place the food right inside than sit for an hour laboring over a delicious home cooked meal. Not me, I think eating is one of life’s greatest pleasures. To be so familiar with that kind of indulgence and then to have it randomly ripped away from you by a stupid sore throat is not cool. Do I sound over dramatic? Well, it was a severe sore throat, OK?

This might have been the first time that I realized that I was taking food for granted. Not only was I used to savoring my mom’s home cooking on an almost nightly basis, but, after dinner I usually liked to have something sweet. I was never a huge cake person, but if there was a box of anything Entenmann’s in the house, that shit wouldn’t last more than a couple of days. The variety pack of donuts (the one they’ve been selling forever) would be dead meat if it came within a few feet of my radar. Nowadays I don’t crave sweets anywhere near as much, but back then, an Entenmann’s box knew that its days were numbered as soon as it was removed from the plastic A&P bag and set off to the side on the kitchen counter. It was saying Hail Marys and making last minute alterations to its living will. What do you pass down to your niece, the sweet cheese danish? 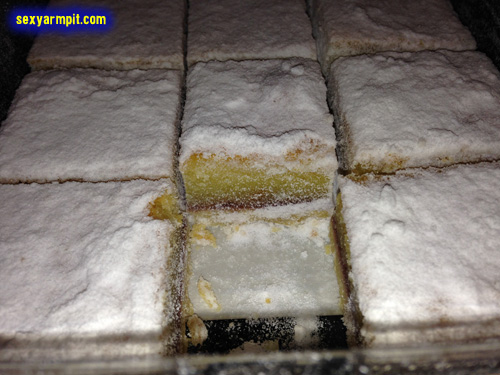 The “Ultimate” Almond Squares – now with a layer of Raspberry filling

So, that bout of strep throat brought my appreciation of eating to an abrupt halt. Rather than savoring the delicious dinner that my mother slaved over that evening, I was swallowing what could only be described as a meal of razorblades chased with a tall glass of Everclear. Damn strep throat. Consider yourself very lucky if you’ve never had to deal with this illness. An irritated and throbbing throat is never a welcome feeling, but strangely, it didn’t effect everything I ate.

Obviously, you don’t want to be eating hot buffalo wings with strep throat. Of course, chicken soup and tea with honey and lemon soothes your throat, but not many other meals can be considered good strep throat foods. It was that night that I inadvertently discovered that I was still able to eat and thoroughly enjoy a certain dessert.

My mom went grocery shopping earlier that day. She picked me up some throat lozenges and a few other things to make dinner. She also bought a dessert that she thought I’d like.

The classy white and blue Entenmann’s box was such a tease. The box sat on a slim stretch of counter between the stove and the wall, it couldn’t have been more than a foot wide, and the box nestled into it’s home quite perfectly. For the rest of the day, and through dinner time, my mouth watered desperately for the contents of the Entemann’s box. Why would I even bother indulging in dessert when I could barely eat or drink anything?

These Almond Squares looked so damn good that it was worth risking the most intense throat pain for them. I’m not talking about Hollywood Squares, or Quaker Oatmeal Squares, these were Entenmann’s f’n Almond Squares. Their mystique was legendary. While not as mainstream as their “Crumb Coffee Cake” or their “All Butter Loaf Cake,” I would not be denying myself these evenly cut squares of moist cake, doused in almond flavoring with powdered sugar on top, even if they were considered a mid-card offering.

I was in need of some comfort food. Besides, there was no rule in the house that said because I was sick that I couldn’t eat these. They were fair game and somehow I had it in my head that these wouldn’t annihilate my throat like the rest of the stuff I was ingesting like chicken parm. In fact, a part of me (the batshit insane part of me) thought they might actually heal my throat.

After dinner, I waited until my shows were on, and I switched the black and white TV on that we had in the kitchen, grabbed the box and plopped my sick ass down at the table. I started going to town on these delectably moist and heavenly squares of powdered perfection and all seemed right in the universe. I had almost forgotten that I was even sick. In fact, several squares into my session, I forgot I even had a sore throat!

Could it be? Could these Almond Squares have powers beyond my knowledge that weren’t listed in the ingredients? Shouldn’t Entenmann’s be required by the FDA to list that type of thing on the box? “Enjoy this delicious treat…also, our Almond Squares WILL CURE STREP THROAT.”

Several years later I recalled how much I loved these Almond Squares. It wasn’t just because I was sick and they provided me with some temporary relief. It was because they were actually awesome. I couldn’t imagine a world without them. Every single time my mom went food shopping I asked her to pick them up for me. I guess it wasn’t meant to be though, because the Squares and I never reunited. My mom broke it to me that she was never able to find them again after that.

Not too long after I got my license I was able to drive around on my own to several local grocery stores and even the Entenmanns outlet store in Edison, NJ to see if they had them. Of course, they were nowhere to be found. At that time, the Internet wasn’t even a valuable enough tool to even consider trying to get a straight answer about them, so I just called Entenmanns. The first rep told me they had no idea what I was referring to. The next rep I spoke to later put me on hold and when she returned she explained to me that they haven’t been made in nearly 4 or 5 years and there were no plans for them to return any time soon.

I never gave up my quest. Every time I passed the Entenmann’s display in the grocery store I would check for those tasty little square bastards. Never found them. Then, back in 2007, I decided to give it another shot. I called and e-mailed Entenmann’s. Again the rep told me they no longer made them, which was a piece of info which I had already known for many years. My last hope was the e-mail I sent to them. I waited several weeks, but never received a reply.

On one random day, I checked my mailbox and noticed a letter from Entenmanns. I felt like Clark Griswold in anticipation of opening up the envelope with his Christmas bonus. Would it be a certificate telling me that they were giving me a lifetime supply of Almond Squares for my undying support of their products? Was it an official Entenmann’s Almond Squares Ribbon that I could wear proudly on my jacket lapel? Was it the secret recipe from their vault so I can make them at home? WHAT WAS IT? I tore it open to find out.

What kind of witchcraft was this? A mysterious letter? I actually held it in my hands, it wasn’t an e-mail. It was made if paper and the coupons they slipped into the envelope were obviously made from pure rhodium. The coupons were worth well more than the savings it leads you to believe. Each one weighs 3 lbs. 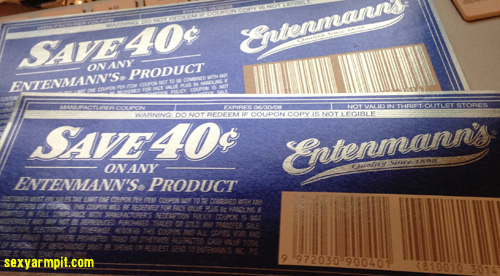 What do we got for ’em Johnny? Parting gifts include two Rhodium encrusted limited edition Entenmann’s coupons for $0.40 cents off any of their products. Expires 6/30/08

I could’ve easily expressed my thoughts about this back in 2007, but if I felt like it would be a waste of time because there was no way anyone else would have the same passion as I did to make this into an actual thing. I’m not saying I was going to be orchestrating a campaign or picketing outside Entenmann’s Headquarters to get these squares back on store shelves, but I was absolutely making more noise about these damn Almond Squares than anyone else on the freaking planet, especially nearly 15 years since the last time I remember eating them.

Now, it’s been over 20 years, and as a goof, I figured I’d do a Google search for them. What do you know? A new “Ultimate” version of the squares are available miraculously and nobody from Entenmann’s notified me. I checked the product locator on their site and immediately drove to the nearest store they listed. I picked up 2 packs.

I’m about to eat one now.

They are little different. I can’t officially say for sure, but I don’t remember the original having a layer of raspberry filling in them, but these are now referred to as “Ultimate Almond Squares.” The word Ultimate is possibly there to indicate the inclusion of the raspberry. The almond flavor and the moist consistency is all I remember though. They are still good, but I’m thinking this raspberry filling is an added feature to appeal to the newer, edgier dessert buying crowd. I’m just thankful they’re not Red Velvet Almond Squares. That would be a major sellout.

I have to say that this is the euphoric culmination of a 20 year chase that I had hoped for. Naturally, compared to when I was 13, I’m now able to deal with getting a sore throat better than when I was a kid. I’m forever thankful to Entenmanns Almond Squares for being there by my side to make my first battle with strep throat slightly less torturous.

Check out two other Entenmann’s posts here at The Sexy Armpit:
http://thesexyarmpit.blogspot.com/search/label/entenmanns

* Entenamnn’s has been a tradition in the Northeast since 1898 and is now owned by Bimbo Bakeries, USA, the American arm of Mexico’s Grupo Bimbo. http://www.entenmanns.com/