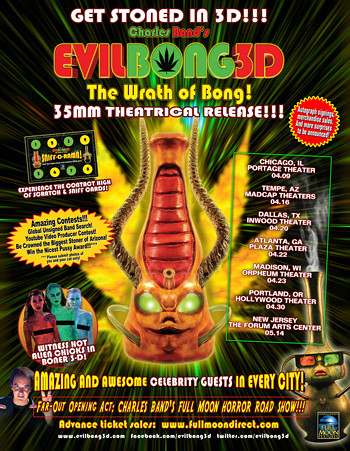 Yes, I do have enough brain cells to realize that today is 4/20. But today I’ll be telling you about another important day which is a little less than a month away. On May 14th, Full Moon Features’ Horror Roadshow, featuring the local premiere of Evil Bong 3-D The Wrath of Bong, will make it’s last stop at The Forum Theater Arts Center in Metuchen, New Jersey. Unfortunately, I missed out on the last couple of Full Moon’s roadshows in my area, so I’m anxious to experience it for the first time. Lucky for me, this installment of Evil Bong will be in 3-D and features Sniff-O-Rama! Wait, that’s not all! There’s also going to be a Full Moon Film Fest as well!

The festivities begin at 4pm and they won’t close up shop until approximately midnight folks. That means you will have plenty of time to take in the scene. Special guests will include producer and director Charles Band, Barbara Crampton, and Charlie Spradling among others. You’ll also be able to purchase lots of Full Moon Merch as well as take part in audience participation.

Described as a “galactic stoner horror comedy,” Charles Band himself has been quoted as saying that Evil Bong 3-D has a “record amount of naked alien beauties, boobies, and reefer hits to ever be presented in 3-D.” I’d say this is truly some good news. If you’re already a fan of the Evil Bong series, you need to be at this event!

There aren’t many filmmakers who will bring their films directly to the fans, but Charles Band takes it to the next level. He not only comes to town personally to screen his new film, but he’s also bringing guests and an over the top roadshow. Who needs the corporate movie marketing machine of regurgitated crap? As the legendary KISS would say, it’s going to be like “you’re in the Psycho Circus.” Last night at Madison Square Garden it felt like Van Hagar never existed. Dave, Alex, Eddie, and Wolfgang joined forces to bring fans a reunion tour. I know, I know…we all loved Michael Anthony but honestly, no disrespect, but I think all 20 some odd thousand of us were jam packed into the world’s most famous arena to rekindle our romance with the classic chemistry between Diamond Dave and Eddie Van Halen. There must’ve been a huge payoff because I would’ve never known these guys ever had a modicum of animosity toward each other by watching them on stage last night. The fact that David Lee Roth and Eddie and Alex Van Halen were nowhere in sight at their own Rock Hall induction ceremony didn’t even enter my mind. For me, this concert far surpassed any acceptance speech. Van Halen relentlessly pummeled their astonished audience with classics like “Everybody Wants Some,” “So This Is Love,” and “Mean Streets.”

I desperately want to be cliche and say that I took a time machine back to ’84 and that absolutely nothing has changed with VH, but it has, and it’s kind of impressive. Eddie’s a bit older now and reminds me of David Letterman, but he’s every bit the virtuoso he always was and that’s an understatement. If you’ve never witnessed Eddie Van Halen’s guitar execution it’s literally mind blowing. So, regarding Eddie being awesome on guitar, then it’s still ’84. He made that guitar his bitch and he did things you didn’t even know were possible with a guitar! It was like he studied the ancient art of Guitarma Sutra. Diamond Dave is still the master of ceremonies and a stellar showman, so that part is still the same. He’s opted NOT to wear spandex, tassels, or rock big hair, but he’s still twirling his mic stand and doing his random patented A.D.D spin kicks. Gotta love him…after all, he IS your Ice Cream man and he’s way more ripped than you!
To feel mesmerized at a concert if you’re not high is pretty remarkable. I just stood there letting these classic VH songs that I grew up with unfold before my eyes. I did get to hear alot of these songs when Van Halen toured with Gary Cherone, but this is really what many fans have been waiting 20 years for. With “Beautiful Girls” and “Somebody Get Me a Doctor,” the band’s chemistry just felt right, and not forced at all. That’s why I find it so strange why so many writer’s and critics are spreading the opposite word around. This show was as f’n organic as the pot in the audience that was giving me a contact high. At that point, “Dance the Night Away” and “Atomic Punk” just brought me more into rock euphoria.
Although “Jaime’s Crying” sounded a bit herky-jerky, getting to hear Dave’s banter throughout the show, though minimal, was a real treat: “Don’t stick that tongue out at me unless you intend to use it hot stuff!” The pinch to let me know I was actually in ’07 came when Dave referred to a “booty call,” since that term didn’t get big until Hagar was in office.
I sensed a vibe of relief onstage. It seemed like these guys were actually having a good time and happy to finally be “wrecking the place” together again. It’s not impossible since they still retain their title of world’s greatest party band and they always do it up big and thunderous. Naturally, this monumental night was capped off by Van Halen’s most recognizable song and biggest hit, “Jump.” Let’s just say I saw enough high fiving in the row in front of me to last a lifetime.
Some highlights for me were “Panama,” “I’ll Wait,” and “Hot for Teacher.”
www.SexyArmpit.com

I tried to catch up on some movies that I’ve been meaning to watch this weekend. First I watched Killer Bud a stupid pot movie starring Corin Nemec from Paker Lewis Can’t Lose and Bud Bundy. On a sad note it WASN’T about Bud Bundy going on a killing spree after Married With Children was cancelled. It WAS definitely a B movie, but worth watching. I enjoy stupid movies especially when they involve characters who are stoned and going on some ludicrous adventure. This was basically the precursor to Harold and Kumar go to White Castle.

Speaking of Harold and Kumar, I just read on IMDB that Kal Penn is a Jersey guy. That’s pretty cool considering that the whole movie is based in New Jersey as well. Penn, is starring in a sequel to Van Wilder entitled Van Wilder 2: The Rise of Taj. I can’t stand that they use the title “Van Wilder” when Van isn’t even in the movie! I wouldn’t even care if they got someone to replace Ryan Reynolds but his character isn’t even in the movie! It’s like the Wes Craven Presents epidemic. The name dropping is ridiculous.

I also watched Dressed to Kill, a film directed by Brian De Palma who’s one of my favorite directors. This movie was off the freakin‘ wall! First there is some hot shower scene, jump to a kid’s wacky science project, a mysterious walk through a NYC museum, then some venereal disease, followed up by a killer transsexual. Man it doesn’t get any better than that! That’s entertainment. My days are nowhere near that interesting. Although I would detest having to life my afterlife knowing that I was killed by a transsexual after contracting syphilis.