Hard to believe that this Halloween season has already come and gone. Time flies is a total understatement in this case. It feels like a few weeks ago when I started hitting stores for Halloween stuff and filming the Halloween Special. Now here we are, it’s almost November. Crazy.

To me, one of the most fun things about Halloween is reminiscing about previous Halloween seasons.  We do that often on the Purple Stuff Podcast, but this time around, this season has demanded a bit of a retrospective.  Me and Matt from DinoDrac will be running through some of our favorite stuff from this Halloween season. At first, the season didn’t seem like it would yield much of a bounty, but it was surprisingly massive.

With so much to discuss, we had to narrow it down so we wouldn’t be recording for 3.5 hours.  Some topics included in this episode are movies, animated plush toys, old Toys R Us sites, and green bun burgers. Check it out wherever you like to listen to podcasts!

Thanks to all of you who are reading this. Much appreciation for the tweets, shares, and comments whether for The Sexy Armpit Halloween Special and The Purple Stuff Podcast. It’s awesome to have you on board and stay tuned for more podcasts and videos really soon! I hope you have a kickass Halloween! 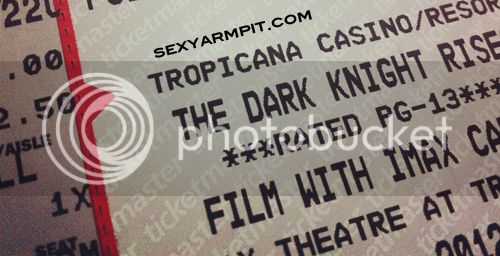 Dark Knight Rises Tickets
These have been burning a hole in my pocket since June 11th. I’m almost in disbelief that it’s a little over a WEEK away! The wait is finally over!

Wawa
If you’re from Pennsylvania or New Jersey then you are most likely familiar with the greatness of Wawa. During our recent trip to Wildwood, Miss Sexy Armpit and I stopped at the Doo-Wop styled Wawa to get our favorite sweet cream cheese stuffed pretzels that they make. I’m not a big preztel guy, but this thing is so delicious. I also ordered a banana smoothie which was very simple: it’s basically made of ice, a dairy blend, and 2 bananas. It’s the best banana smoothie ever. If you are lucky enough to have a Wawa by you they also sell all kinds of coffee, subs, breakfast sandwiches, and some of the best iced tea around.

Changes to Supergirl Costume
I’m usually the guy who opposes the unnecessary modifications and modernizations of superhero costumes. In 1989 when the first photos of Michael Keaton’s Batman costume were released I wasn’t even phased because it looked so friggin’ cool. It was a major change color-wise, but it was still extremely faithful to the traditional bat-costumes through the years. One costume I never ever thought should be changed was Superman’s. In the upcoming Man of Steel movie his costume has been tweaked to make it seem more realistic and modern like they did in Batman Begins. I still can’t get used to such drastic changes. Don’t get me wrong, I am all for the characters evolving with the times, but sometimes I feel like changes are made just for the hell of it. In the newest Supergirl comic book line from DC Comics, she has a more modern look as well and surprisingly I’m not against it. The deeper I got into the series the more I thought the costume was cool. What do you think? Yay or Nay?

Men’s Room – House of Blues, Atlantic City
Usually going to a public bathroom isn’t too exciting unless you’re going in there for purposes other than actually using the facilities. While it’s not anything as upscale as the Borgata or Water Club, the

men’s room in the House of Blues in Atlantic City kept me distracted for several minutes as I stared at all the pinup and retro tattoo style art on the walls. Pictured above is a glimpse of a cute sailor girl on the wall near the entrance.

Fixation with 1980s Burger King
Unlike most of my friends when I was growing up I always preferred Burger King over McDonalds. My Dad used to take me to the BK at the old pre-90s Menlo Park Mall and I absolutely loved every second of it. To say I miss the old look of the exterior of BK is an understatement. I wish they’d bring back their old logo and the uncreepy version of the Burger King who did magic tricks. I still have my BK doll with the “incredible” disappearing hamburger trick.

Squinkies
I did the best I could. Actually I’m lying. I didn’t. I gave a feeble attempt at resisting Squinkies but I just couldn’t do it. It’s not an all out obsession either. I’m not even interested in the G.I Joe or Star Wars Squinkies – only the WWE series. A couple of my favorites are pictured above, heading in to get some Whoppers at my ’80s BK model. For being such minute bits of rubber they are highly detailed with comical and often flat out absurd facial expressions and likenesses of the real wrestlers. They remind me of the simple and stupid crap toys from the red nickel machines (or are they quarter machines now?) you see when exiting Toys R Us.

Nudity, Lesbians, Chicken, and Zombies! My review is over, that was easy!

Get Poultrygeist on DVD!

Some folks are simple and don’t require elaborate explanations “cocked” with flowery, persuasive language. For those who DO require more, read on!
Troma Films’ Lloyd Kaufman not only directs, but also makes a cameo appearance in his latest and greatest film Poultrygeist. If you’re the type of lame-o who doesn’t appreciate Troma films then you’re probably the one sitting like a bump on a log at parties also. If you’re going to watch Poultrygeist, first you’ll need to lighten up a bit. Did Gary and Wyatt from Weird Science have any fun wearing their jeans into the shower with Lisa? Hell no! Just like Lloyd Kaufman whipped up his wondrous special recipe when making Poultrygeist, The Sexy Armpit has it’s own special technique on how to enjoy Poultrygeist at the most optimum level.
1) Pick up Lloyd Kaufman’s gory, sexually explicit, social commentary Poultrygeist (available NOW on DVD at finer stores everywhere)
2) Head to the nearest fast food joint and order some of their cheap, gut busting, hormone infused, secret sauce swimming fare…TO GO!
3) Get comfortable, take those jeans off if you have to! Boxers are optional of course.
4) Have plenty of napkins/and or paper towels in close proximity….(cause the food will make your hands greasy, douche! what were you thinking?)
5) Think long and hard about what you’re about to do. You may want to go to confession before watching Poultrygeist. You may also want to reconsider ingesting this food. Ah, f–k it.
6) Make sure your hands aren’t greasy and then insert the Poultrygeist DVD. Before insertion, make sure the disc is in correctly to avoid it coming out too quickly.
7) Push start on the DVD player. Proceed to laugh, vomit, and spray shit from your ass like it’s coming out of a whale’s blowhole.
I’m known for my occassional overuse of the “C” word. There are even times I call my mom the “C” word. I know how it is to get angry and scream “Mama Weer All CRAZEE Now” as in the Slade/Quiet Riot song. Although, when I’m not using the word “Crazee” I use the acronym C.L.A.M, which stands for Collegiate Lesbians Against Megaconglomerates. C.L.A.M is a group of “left wing lipstick lesbos” protesting the fast food joint The American Chicken Bunker. This particular Bunker franchise in Tromaville is accused of cruelty to animals, and to make matters worse, it’s also built on an ancient Indian burial ground. Lloyd Kaufman is the only director in the world who could fry up a masterpiece with that kind of plot.
After some cemetery sex with her, Arbie, our main man, learns that his girlfriend Wendy has turned lesbian. She’s now hooking up with Micki (named for McDonald’s perhaps?) who’s the A #1 C.L.A.M. In retaliation, Arbie decides to take a job as a lowly employee at the American Chicken Bunker in order to win Wendy back from the clutches of C.L.A.M. In the meantime, there’s ooey-gooey zombie chicken eggs hatching out of people’s asses! Zombie chickens are hatching and attempting to maul anything in their path. They begin to terrorize Tromaville, and more specifically, the Chicken Bunker that resides on the ancient Tromahawk cemetery.
Poultrygeist includes more fast food references than you can shake a BK chicken fry at. In addition to Arbie and Wendy, the other employees at the American Chicken Bunker are named after fast food joints also. There’s Denny, Paco Bell, and Carl Jr, who basically shoves his dong into an uncooked chicken carcass and makes sweet love to the filthy beast. While the scene lacks the Eugene Levy-whimsy of the kitchen masturbation scene in American Pie, Carl Jr would easily rip Jason Biggs testicles right off if he knew he was banging warm apple pies instead of indulging his little piece into the wild, untamed world of cold, uncooked, chicken coitus.
I couldn’t believe I was watching the first ever musical, fast food, horror-romance unfold before my eyes. Poultrygeist is a disturbing but delicious marriage of movies like Fast Food Nation and Night of the Living Dead. SEE IT, for the sole reason that it will leave you with an indelible, unrepairable, artery clogging, strange sensation…and it may also make you want to puke. For the best in Zombie chicken orgies, over the top humor, gore, blood spurting decapitation, and disembowelment, see Poultrygeist! You’ll never look at a guy in a chicken costume in the same way again.
www.SexyArmpit.com